Wiggert realizes projects with concrete mixing plants for high-quality concrete types in many regions of the world. These plants are individually designed.

The agency Artwork from Karlsruhe (Germany) asked us whether it is possible to present an entire plant interactively. This would help the sales department to demonstrate the advantages of the plant. But such a system consists of an enormous amount of individual parts.

In the Beginning Processing huge amounts of CAD data

After we had received the first data, we quickly clear realized what the challenge in the project was. The plant was so extensive that we had to use all our experience in handling complex geometry for real-time applications. 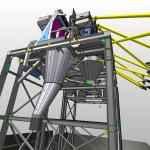 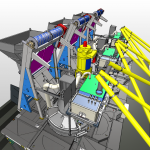 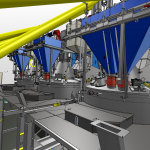 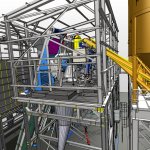 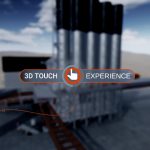 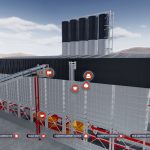 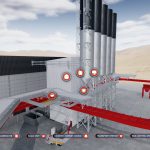 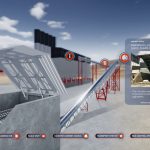 The application was used with great success at the BAUMA. The user could interactively move through all stations of the plant in real time. With the help of hotspots important additional information could be called up.

BASF offers high-performance plastics with a wide range of properties. These materials can be used in completely different industries.

For the K trade fair, BASF commissioned us to develop an app that presents applications in the kitchen and household interactively on an LED wall in a realistic and exciting way. In addition, information about the products should be accessible.

In the Beginning Concept

For space reasons, the LED wall was specified as a portrait format. The basis for the application was a kitchen unit drawn from one of our animations. We took advantage of this fact and developed the idea of using a touch monitor to move the image content along the wall. In this way we were able to realize real proportions.

We built a initial preview for the customer to illustrate our concept.

Ease of Use UX/UI

A combined capturing with the LED wall display and the touch monitor let the client experience the ease of use.

At the fair, the large wall acted like a window into a virtual world. The presentation of the products was inspiring and clearly underlined BASF’s competence in high-performance plastics.

Impressions at the fair

BASF has many plastic products in its portfolio that can be optimally used in demanding environments thanks to their outstanding technical properties.

For a newly developed plastic with improved properties, a campaign was to be launched at trade fairs and in print and online media. The agency’s concept was to visualize the properties of the plastic through a character. From that point on Creapolis came into play.

In the Beginning Character development

In the first step, we created layouts and coordinated them with the agency and client. After the design was approved, we modelled the Hero in 3D, textured it and produced a key visual with appropriate lighting.

In order to make the advantages of the material interactively accessible for the visitors, we developed an easy to use touch app. Thereby they could learn a lot about the properties very quickly and in an exciting way.

The special feature was the transparent monitor, and the Hero from the 3D printer. This attracted attention and caused a surprise.